The latest Ebola crisis is the worst ever documented in Democratic Republic of Congo (DRC)—and the second-largest Ebola outbreak recorded anywhere. Efforts to stop the spread of the disease are challenged by the realities of fighting an epidemic in a conflict zone.

DRC’s Ministry of Health officially declared a new outbreak of Ebola virus disease in North Kivu on August 1, 2018. It is the country’s tenth outbreak of the deadly virus in 40 years.

On July 17, 2019, the World Health Organization declared the Ebola outbreak in Democratic Republic of Congo to be a public health emergency of international concern.

On March 3, 2020, Semida Masika was discharged from a Doctors Without Borders/Médecins Sans Frontières (MSF) Ebola treatment center in Beni, in North Kivu province. She was the last patient with a confirmed case of Ebola. If there are no new cases, the epidemic could be declared over by mid-April. The World Health Organization (WHO) recommends waiting two full incubation periods—42 days—after the last person tests negative a second time before declaring the end of the outbreak. On April 10, just three days before the outbreak would have been declared over, a new case of Ebola was recorded in Beni. The outbreak is not over, and continued vigilance is essential. 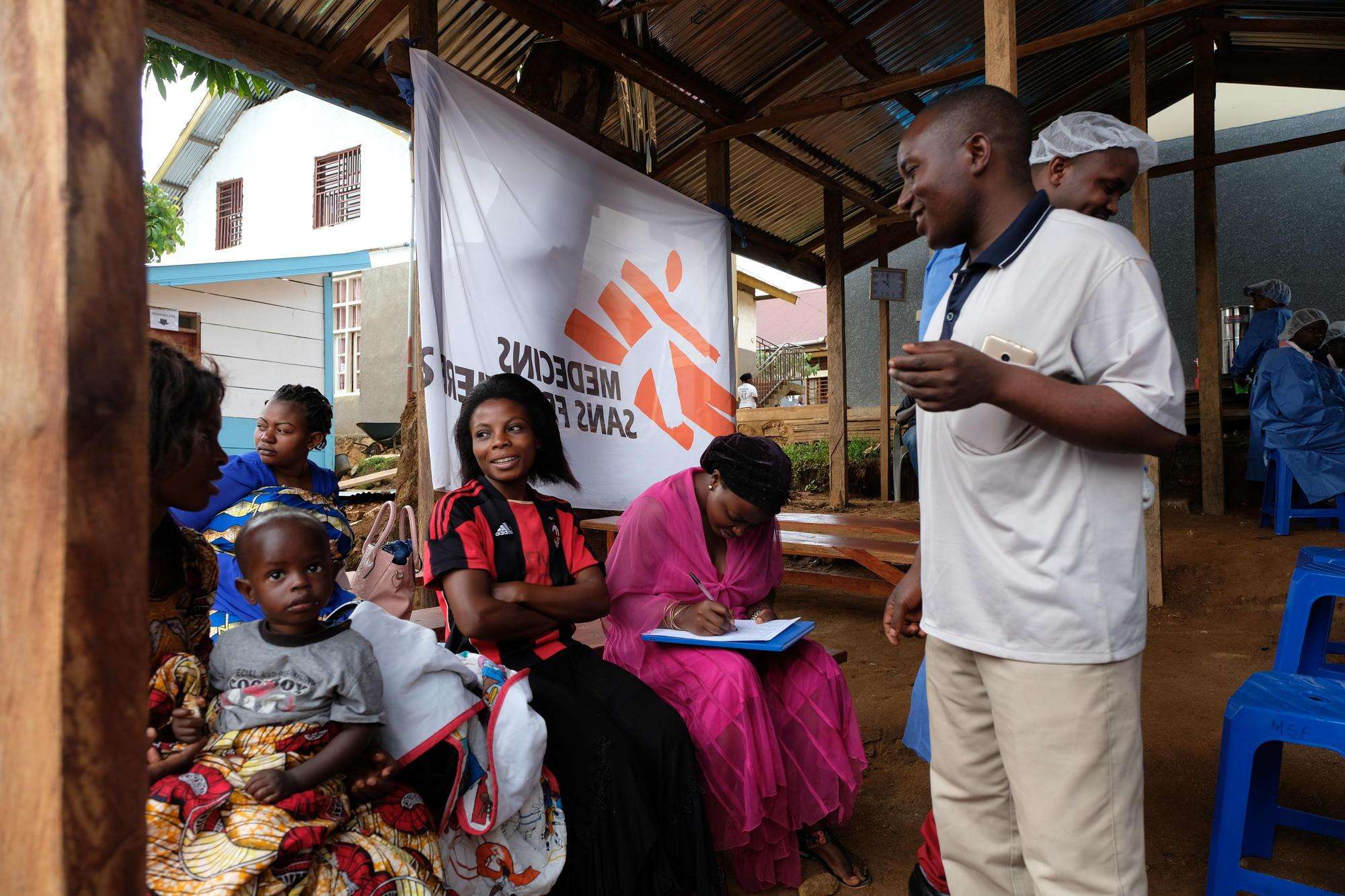 The latest on Ebola in DRC

At the request of the Ministry of Health (MoH), Doctors Without Borders/Médecins Sans Frontières (MSF) is part of the national task force coordinating the intervention based on several pillars of the Ebola response. As of January 27, 2019, MSF had received 3,292 people at its Ebola treatment centers and transit centers in the affected region. We have treated a total of 321 patients confirmed with Ebola. MSF has also vaccinated more than 4,800 frontline health workers, who are among those at greatest risk of contracting the disease.

Last night, the first case of #Ebola was confirmed in Goma, DRC.

We’ve been building Ebola preparedness in the city of about 2M people for over 6 months.

Together with @MinSanteRDC @WHO we will continue to monitor the situation and provide care. https://bit.ly/2JxO3zE 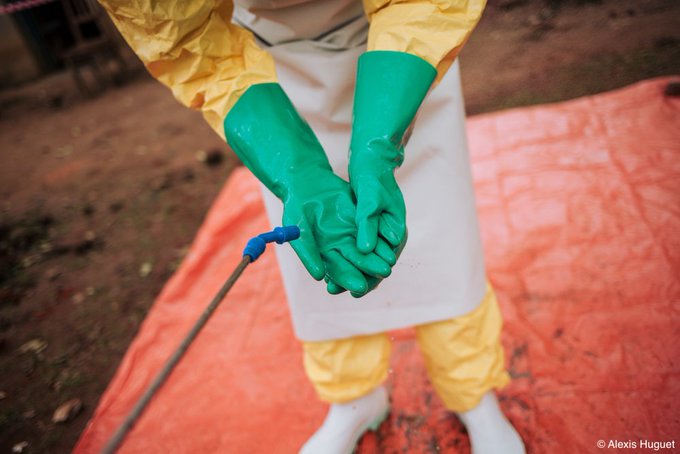 39 people are talking about this

Medical activities have been suspended at MSF’s Ebola treatment centers in Butembo and Katwa after the facilities were attacked by unidentified assailants in late February. MSF has evacuated staff from the area for their safety pending a thorough analysis of the risks associated with continuing to provide medical care there.

The epicenter of the Ebola outbreak is in North Kivu, a densely populated area in the country’s northeast. North Kivu shares a border with Uganda and is a hub for travel and trade, as well as human trafficking. North Kivu has also been an area of conflict for over 25 years, with more than 100 armed groups active in the region.

As the number of new confirmed Ebola cases continues to grow, violence and political unrest in the affected areas have further restricted the community’s access to health care. Security constraints are hindering the Ebola response, making it difficult to identify new cases, trace contacts, and conduct vital community outreach activities. Some health centers have been damaged or temporarily closed.

“In this situation people might have no other choice than to seek medical help in health facilities that do not have adequate triage or infection prevention and control measures in place, which makes the risk of contamination higher,” said Laurence Sailly, MSF emergency coordinator in Beni. “We are talking about a population that has endured many years of conflict. On top of that, they are now faced with the deadliest Ebola outbreak the country has ever seen. The unrest … adds even more to their plight by limiting their chances of finding adequate medical care.”

On February 24, 2019, unidentified assailants attacked the MSF-managed Ebola treatment center in Katwa, setting the structure on fire and destroying medical wards and equipment. Three days later MSF’s Butembo treatment center was also attacked and burned. All medical activities at the two sites have been suspended.

At our Ebola treatment centers, MSF teams worked to increase the level of supportive care—ensuring proper hydration, providing treatment for malaria and other co-infections, as well as treatment of the symptoms of Ebola. Our clinicians also now have the ability to use experimental therapeutics under various mechanisms, including compassionate care protocols and participation in a randomized controlled trial. The four experimental therapeutics being used in the trial are Remdesivir (GS5734), REGN3470-3471-3479, ZMapp, and mAb114. These treatments are given only with the informed consent of the patient (or a family member, if the patient is too young or too sick) and are provided in addition to supportive care.

Ending the Ebola crisis in DRC

There have been no new cases of Ebola virus disease reported since February 17, an important milestone in the outbreak in Democratic Republic of Congo (DRC). However the outbreak is not over yet, and there is a continued need for vigilance.

The last confirmed case was a patient in Beni health zone, in North Kivu province, now the Ebola epidemic’s only active zone of transmission. This patient was discharged from the Ebola treatment center (ETC) on March 3, meaning there are currently no known cases of the disease in DRC. All other health zones that had previously reported cases have crossed the threshold of 42 days without notifying new ones. The World Health Organization (WHO) recommends waiting two full incubation periods—42 days—after the last person tests negative a second time before declaring the end of the outbreak.

Dr. Jean-Jacques Muyembe, coordinator of the national committee in charge of the Ebola response, has stated that—if no new cases arise—the epidemic could be declared over on April 12. However, the WHO has warned that there is a “very real risk” of new cases emerging.

In all our projects, we put patients and communities first and engage with local people and existing health centers to identify needs and prioritize activities. In addition to integrated isolation and treatment facilities for patients with suspected Ebola, MSF also strengthens health care capacities; builds infrastructure for clean water, sanitation, and hygiene; and invests in community outreach and health messaging in health centers across the region.

The epidemic has severely destabilized DRC’s already fragile health care system. People’s medical needs extend well beyond Ebola, as demonstrated by the ongoing measles epidemic that has claimed many more lives. Phasing out the Ebola intervention will likely have far-reaching impacts. Discussions about the next steps required once the outbreak has ended should start now and consider the many urgent health needs of the population.

We rely on our network of supporters to tell the stories of the people we help. Help get the word out.
Facebook Instagram Linkedin

Learn more about us

How we use funds

See offices around the world